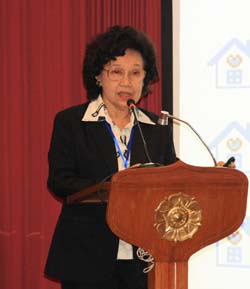 Dr. Prasobsri UngthavornThe first session was explained by Dr. Prasobsri Ungthavorm ,who share the experience and shape policy for foreign doctors in this white elephant country . Dr . Prasobsri start by telling doctors fundamental foreign policy establishment promoted in Thailand comes from the ASEAN declaration on August 8, 1967. Thailand has similarities with characteristics similar fate and between countries . This policy thus becomes the direction of solving the problem for ASEAN and Thailand in particular.

Problems in Thailand in general has similarities with problems in other developing countries. Shortage of health resources are very vulnerable place. In terms of health facilities, Thailand only has 926 government hospitals and 322 private hospitals , general practitioners and the ratio of only 1 : 4319 . Thailand aims at increasing doctors up to 1 : 2500. While the number of specialist physicians themselves only 34500.

Measures taken regarding the issue of Thailand is shaping policy universal health coverage ( UHC ) started in 2002 which has a principle of justice, equity, and has a better quality. Newborns can immediately be covered by the government. This program aims at the improvement of health services, especially in rural and remote areas. The second policy is taken form the center of medical education with the goal of increasing the quantity of health personnel through scholarship programs, public and private cooperation, the addition of specialists, to bring in experts from abroad. The third policy is the policy of accelerating the establishment of the ASEAN community study in 2015. Policy aims to solve the problem of shortage of doctors in Thailand to bring in doctors from abroa .

Dr . Prasobsri added challenges to be faced in the next era of the free market is the increasingly complex problems of disease and high mortality rates. So this policy as one of the solutions to anticipate this. Networking between the countries will work together to be an important key for the program to be on target and allows the doctor to move to the country.

Facts and policies of foreign doctors in Indonesia 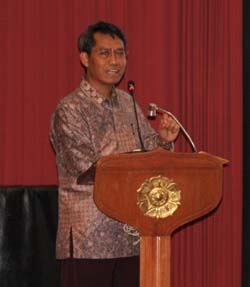 Prof. Dr. Med Trihanggono Achmad, Association of Indonesian Medical Education School start talks on Indonesian policy for foreign doctors are specified on the doctors who have a similar level of education equivalent undergraduate and graduate school education. In addition, doctors are divided over the classification of doctors and dentists where doctors from outside Indonesia and ASEAN countries.

Multi recognition arrangement ( MRA ) in Indonesia is not much different from what is in Thailand and Malaysia. If in Malaysia and Thailand have the MRA group distinguishes dentists and general practitioners, in Indonesia two into one group. In addition , Prof. . Dr . Med Trihanggono Achmad, Association of Indonesian Medical Education School noted the role and duties of the board in Indonesia through Legislation Number 29 of 2004.

Indonesia also has implemented a policy mode 4 , which emphasizes the need for setting back the domestic rules. This policy needs to be reviewed because of the problems idi Indonesia is not the amount of force the doctor. Doctors had a considerable proportion, but has not spread to the needs in the area .

Facts and policies of foreign doctors in Malaysia

S The last session on the topic of physician migration policy presented by Dato ' Seri Dr . Noor Hisham bin Abdullah as a representative of the board of health of Malaysia's policy . Hisham explained overview of the situation regarding the movement of doctors in Malaysia.

According to Hisham, the number of doctors in Malaysia is not a problem anymore, because countries such as Vietnam, the Philippines, Myanmar, Indonesia, and Egypt contribute to the availability of doctors in this country . Breakthrough owned by the Malaysian government in power sufficient for the doctor to send them to the citizens of certain countries before returning to Malaysia to serve.

Hisham in his views on physician migration policy in 2015 knew this explains the real needs to be met is perepatan of medical education itself. Countries that accelerate development of medical school, will be able to meet the minimal needs of the country are still going to doctors.